24 April 2008 | By Kres
Microsoft today announced the release date for Ninja Gaiden II, in development by Team Ninja and exclusive to the Xbox 360. It'll be available across Europe from 6th June for an estimated retail price of £44.99.

Ryu Hayabusa returns in this action-packed sequel to ‘Ninja Gaiden’, on a mission to avenge his clan and prevent the destruction of the human race. Universal themes of vengeance and honour are played out from Tokyo to New York and to the netherworld as a series of dramatic events create a truly compelling story.

Players must become the ninja, utilising a revolutionary combat system that demands skill and mastery of a massive arsenal of weapons. “Ninja Gaiden II” features unique acrobatic combat, tooled with brutal new primary weapons and enhanced versions of old favorites, and Obliteration Techniques allow players to finish off opponents with devastating speed and style, representing a true evolution of the highly popular franchise.

The franchise’s distinctive gameplay is accentuated by a new auto-healing system featuring semi-permanent damage restored at save points.  In addition to this, extensive story mode and multiple levels of difficulty make for an experience that is easy to play, but hard to master – accessible to novices and the most fanatic of gamers alike. 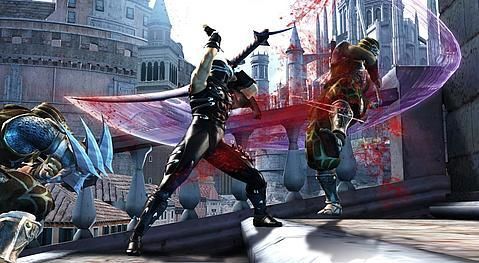 “Ninja Cinema” adds a further dimension to the experience, as gamers are able to record Ryu’s death defying exploits and share their greatest achievements as movie clips with their friends within the Xbox LIVE online community.  Favorite clips can even be coupled with a black-and-white video filter, allowing players to relive their adventures as if part of the Japanese art form of samurai film.