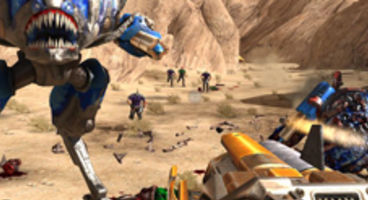 Not content with just giving fans a high-def remaking of the original that is Serious Sam, developer Croteam have moved to Second Encounter.

It'll encompass the "insane action" of the game, but beefed up "to current standards" with a co-op tourney mode thrown in. It's out "early 2010".

Serious Sam HD: The Second Encounter has all the "insane action of the original game but with visuals beautifully rendered to current standards" boast Croteam. It's releasing "in early 2010 for PC and home console," they added.