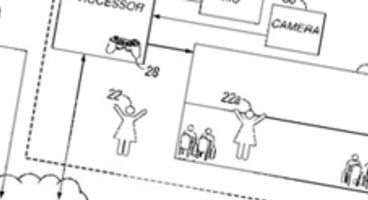 Platform giant Sony has patented the idea of interactive movies, or at least the idea of including mini-games overlapping the cinema.

Basically users could throw vegetables at on-screen actors, or bounce objects off them. They could also save them from a spider bite...

"For example, avatars displayed to a user, in response to user gestures in the real world, e.g. in response to manipulation of a game controller or other such expedient, may toss tomatoes that stick to the actor’s face or bounce off the actor’s face and roll along a table that appears in the movie or television show," reads a description.

Siliconera spotted the rather bizarre patent filing made by Sony, which is accompanied by figure examples with some text to clarify what the heck they're trying to do.

"In FIG. 4A, one audience member (35a) has a game controller or other such device that is used to shoot at the spider. Other audience members may passively view the presentation," read another diagram explanation.

"As an actor walks through a scene in the media presentation, the virtual spider moves with the actor, and also moves up the actors back to bite the actor in the neck."

It seems we'll get to hurl virtual objects at our big screen performers in the future, which I guess is better than trying to hurl actual objects and getting a restraining order.