THQ to pump out less "core" games, to drop 600 staff amid losses

05 February 2009 | By Simon Priest
Amid the publishers posted losses, THQ's Brian Farrell decreed that they would be producing fewer titles to focus on quality and better marketing.

He noted that "aggregate spending will come down" so they can "compete aggressively" when it's time for launch. 250 staff was to go but now that number has risen to 600.

"With respect to the core gamer, the aggregate spending will come down," Farrell said. "The idea is focus, focus, focus. But we will compete aggressively…when we launch."

THQ has posted a $191.8 million loss for the quarter ending December 31st. Sales over that same period were $357.3 million, unfortunately signalling a yearly decline of 30%.

They firmly believe that by "putting fewer core gamer titles into full production," their focus in refining and polishing the project, backed by heavy marketing, will rake in the green.

"Clearly, this is one of the most challenging holiday retail environments that I’ve experienced in my 18 years at THQ," noted the bossman.

With staff cuts now raised to 600, 24% of THQ's total workforce now faces redundancy. It's their hope that this measure will help save $220 million in their next fiscal year.

"Our focus for next fiscal year is to return to profitability and to generate cash," CEO Brian Farrell said in a statement. "Our fiscal 2010 plan will reflect the benefits of our focused product strategy and strong actions on costs."

As hard as it is to swallow, if these kinds of measures weren't taken then the rest of the fine folks at THQ would most likely be out of a job too as the firm collapses.

What game properties are also going to get the boot from executives? Saints Row 2 hasn't performed as well as the circus master would have liked, especially on PC. 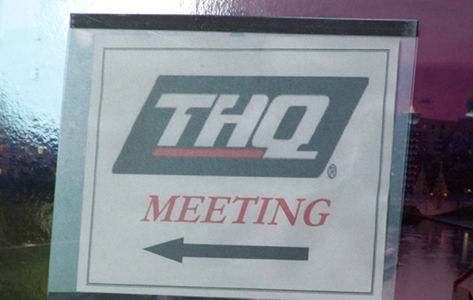