It's based on the 1989 title from the "magical little system" called the TurboGrafx-16. It's a turn-based strategy that's not about resources but tactics, and "punishing" a careless foe.

"I am extremely excited to be here today to re-announce Military Madness: Nectaris to the world!" posted Tunison on the US PlayStation.Blog.

"I say “re-announce” because the game was first brought to the public eye several months ago, but at the time, the game could only be talked about in terms of bullet points."

Players takes turns moving their squads around the battlefield, which can comprise of 20 different unit types, with each carry pros and cons. While there isn't any resource management to handle, there are factories to capture which let you steal squads and repair damaged ones.

Once a squad is gone, "it’s gone for good." The PSN title includes the 32 original missions from the 1989 game, which was just called Nectaris in Japan. "Of course, we’ve got the prerequisite spiffy new graphics and built-from-the-ground-up AI," added Tunison.

As for a release date: "Summer 09 is as specific as I can get at the moment… but we’re in the home stretch!" he replied to a fan, with a demo "around the time of the game’s release."

'Military Madness: Nectaris' is being released on Xbox 360, PS3 and Wii. 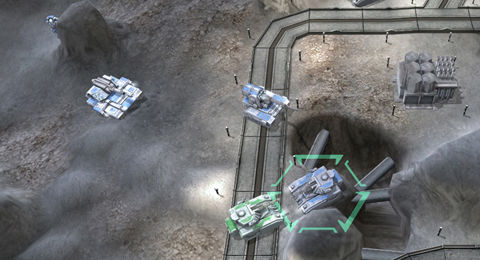