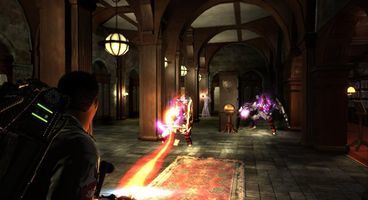 Sony Pictures Entertainment has issued a press release that announces the 25th Anniversary of the Ghostbusters movie, revealing that blu-ray versions will be released, but more importantly lets a release date slip for the upcoming video game by Atari.

July 16th is the date, according to this piece:

America’s favourite paranormal psychologists are back to save the world, this time with unsurpassed picture and audio quality and advanced new bonus features in the Ghostbusters Blu-ray Disc, releasing worldwide the week of June 16, 2009. The simultaneous launch of Ghostbusters: The Video Game, the highly anticipated videogame from Atari, celebrates the film’s 25th anniversary, with an all-new adventure from by the film’s original writers.