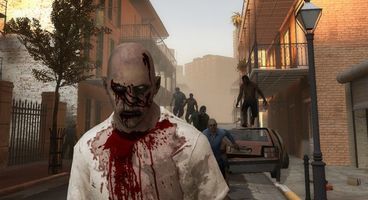 Valve today announced Scavenge, the fourth game mode to be included in Left 4 Dead 2. Scavenge mode challenges players to compete in round-based games of up to 8 players (Survivors vs. Infected).

The Survivors must battle both the Infected and the clock as they collect gas cans to refuel a generator located in each map. Every can the Survivors pour into the generator scores their team a point and adds time to the clock.

On defense, the Infected team plays as the boss Infected (including the new Spitter, Jockey, and Charger). They must keep the Survivors from fueling the generator by attacking them, destroying the gas cans, or running out the clock. During a round, each team gets an opportunity to play both sides, with the round going to whichever team successfully delivers the most cans.