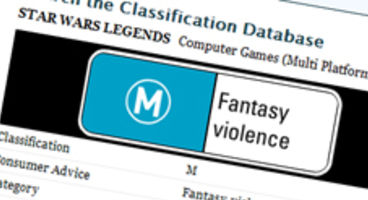 The upcoming 2009 VGAs are said to hold a brand new Star Wars game, and the Australian ratings board may have just given us a name.

It was submitted for approval back in June, rated Mature for "fantasy violence" with publisher Activision attached to the LucasArts project.

It's highly probable that Star Wars Legends is the mysterious new title to be show for the first time at the Spike 2009 VGAs event that kicks off December 12th. Hopefully this won't be some shoddy quick-fire PSP title, but something... well, legendary would be nice.

Does the dark side cloud our better judgement, or could it be something great?