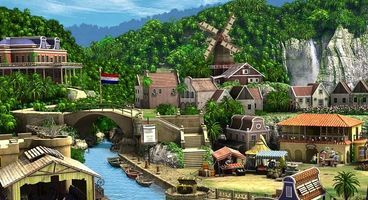 GamersGate today announced a distribution agreement with Blitz Games Studios to host two of its PC titles: Buccaneer: The Pursuit of Infamy and Droplitz. These titles are available from GamersGate now.

"GamersGate is thrilled to provide a commercial outlet for Blitz Games Studios, and we look forward to building a strong relationship with them in the future," said Theo Bergquist, CEO of GamersGate. "Developers like Blitz Games Studios are the reason we started GamersGate, and our passion for providing the largest, most accessible library of games is satisfied with this partnership"

Buccaneer: The Pursuit of Infamy puts gamers in charge of a crew of pirates as they loot and pillage their way to infamy. Play the single player campaign, or compete with up to 18 other ships in cut-throat, team-based multiplayer. Droplitz is a unique and challenging puzzle game, where players must rotate dials in order to create pathways for the Droplitz as they slowly trickle down from the Droppers at top of the screen to the Collectors at the bottom. Buccaneer: The Pursuit of Infamy and Droplitz can be purchased from GamersGate for $19.95 and $9.95, respectively.

"We’re delighted to have joined up with Gamers Gate for distribution of both our own and Blitz 1UP titles," said Chris Swan, Business Development Director at Blitz Games Studios. "They are a very strong player in the digital distribution market and capture audiences from all walks of life. Since this closely matches the variety of games that we aim to supply we’re undoubtedly going to enjoy a great partnership moving forward together."