Next PlanetSide referred as 'PlanetSide Next', has 'massive scale'

12 October 2009 | By Simon Priest
Sony Online Entertainment boss John Smedley has named the MMO PlanetSide sequel as 'PlanetSide Next' in his new LiveJournal entry, it's "an amazing game" he loved to bits.

It wasn't without "frustrating things" though, and the sequel will "take the essence" of the game to new heights. It will have massive battles "no other FPS will touch" in terms of scale.

"I love Planetside. I really do. It's an amazing game. you won't find any other FPS where you can have a 100 vs. 100 battle raging. And we pulled this off 5-6 years ago," blogged Smedley.

"Planetside had a lot of really great things about it, but it also had some frustrating things. The whole Sanctuary concept is something that slowed things down too much. We also didn't get people back into the action quickly enough."

"But the core of Planetside - massive battles with vehicles and infantry was something we nailed really well." I remember I beta tested the innovative sucker back in the day.

"To me, Planetside Next means we get a chance to take the essence of everything that was fun in Planetside and make it a lot better. Massive battles on a scale no other FPS will touch," Smedley added. "None of this 64 player stuff. REALLY MASSIVE. With much better organization, and a tight focus on making sure the action is always going on, with awesome graphics."

"Damn I love Planetside. I really do." Do you love, or did you love PlanetSide? 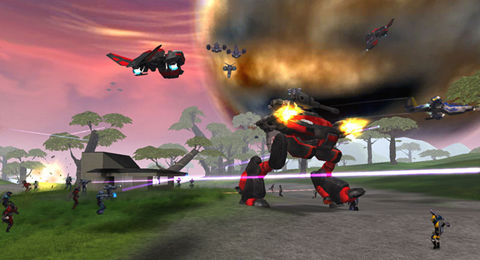