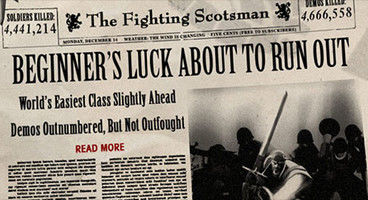 Another day, another TF2 update. Bringing forth yet another round of changes in their new 'War' update, Valve have replaced the Demoman class' bottle and Bomb Launcher with a Shield and a haunted Claymore called the 'Eyelander'.

The new weapon cannot cause critical hits and reduces the Demoman's starting maximum health, the Eyelander grants him a boost to maximum health and speed for each head it claims. This is balanced out with another new alternative weapon – The Chargin'Targe. This allows the Eyelander to get criticals, grants 65% damage resistance and 50% fire damage resistance, and an alt-fire ability to charge forward at great speed with boosted melee crit power.

In terms of the 'class war', Valve have stipulated that whichever class frags the most before 'War' hits on December 17 will receive an exclusive fourth unlock.

Whilst this latest update still proves Valves commitment to keep the game fresh and interesting, it's amusing to see the mixed reaction this is having amongst the fan base. Something tells me the outbursts aren't entirely justified this time round.

What are your thoughts?