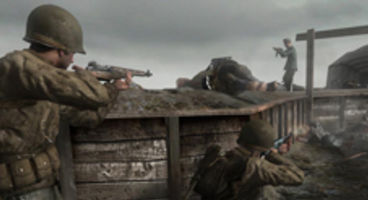 A Los Angeles Times article claims that publishing giant Activision has enlisted a third studio to work on the huge Call of Duty franchise.

Their report says Activision are "considering adapting" it into an MMO, which is likely given desires to launch new "online monetization models".

"Although Infinity Ward and Treyarch have produced sequels in alternating years since 2005, the publisher now has a third development studio working on future versions," reports latimes.com

They add: "One person close to the company said it also was considering adapting Call of Duty as a massively multi-player online world." Boss Kotick has already expressed that Activision wants to exploit more of this online money model.

In fact CEO Kotick has said he wants to monetize "the natural evolution of a property like Call of Duty into a massively multiplayer environment", with CFO Thomas Tippl chipping in that, "you should expect us to test and ultimately launch additional online monetization models of some our biggest franchises like Call of Duty."

Would you welcome a Call of Duty MMO? Perhaps that's what Blizzard has been working on all this time? Wouldn't that ensure it's great or something?