23 October 2009 | By Simon Priest
The LEGO Universe MMO has been in the works for three and a half years now, with a release on PC expected for next year. The game's story centers on rebuilding.

It plays in similar style to Traveller's Tales LEGO platform games, and doesn't adopt traditional RPG levelling. Players can either follow the story or build, brick by brick, their own creations.

"...the game opens on the bridge of a starship that's in the process of being ripped apart by a black hole. The black hole has destroyed the LEGO Universe, and you've got to put it back together," reports Eurogamer, on their first-hand experience.

LEGO Universe ties all of the themes you'll find in their product lines with fans able to visit each of them on their own worlds. It's said to be in-between Second Life and World of Warcraft. As players progress they'll be rewarded with new skills, items and more 'hearts' (life).

The story-based missions can be followed or users can retreat to their own private construction areas and build what they want, though all blueprints must be vetted by moderators and the system itself. LEGO Universe is open to adults and children after all.

"Players will be able to see each other building, although the specifics of the construction will be hidden until the model is approved. Certain areas in the game are showcase areas, each devoted to a different object, allowing you to show off your creativity to passers-by."

It involves freeform building of LEGO or the quick style of LEGO Star Wars and co. from developer Traveller's Tales. Building can only be done when players have enough 'imagination level' which acts as the more traditional mana.

LEGO Universe is being released on PC in 2010, and is in development by NetDevil. Are you a fan of the plastic bricks? Think you'll be curious enough to see what the fuss is all about? 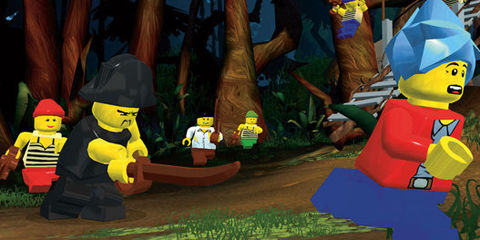