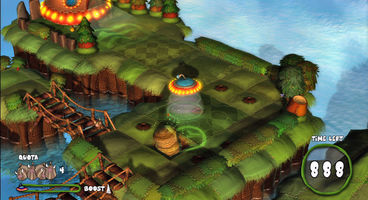 Capcom has confirmed this morning that its upcoming sheep-herding arcade game called Flock! Will be released on Xbox Live on April 8th, PC April 7th and PlayStation Network on April 9th.

In Flock!, players take control of a UFO that has been given the challenge of herding farm animals to its mothership through a variety of puzzle-filled interactive levels, including corn fields, pastures and other “plushie”-like environments. In order to succeed, players will have to manage the quirkiness of the animal’s distinct behaviors, as well as solve a series of environmental puzzles using Flock’s! physics-based gameplay.