25 August 2009 | By Simon Priest
At first it was believed the new title that appeared on the ESRB ratings list, adventure game 'Axel and Pixel', was being handled by 2K Games themselves; Mafia II's team.

Not so confirms 2K, Czech developer Silver Wish Games is working the project. It's an "E for Everyone" point-and-click adventure, with comic mischief and crude humour says the ESRB.

It lists the game for Xbox 360 so it's likely to be an XBLA title. "...players guide an artist and his dog through surreal and abstract environments. Players must solve environmental puzzles that include redirecting a ray of light, throwing rocks at birds, and spraying water at a creature."

Whether the title will remain an exclusive to Microsoft's platform is unknown, the Australian OFLC lists Axel and Pixel as a multi-platform title. No more info is available on the game.

Well, except this: "In one scene, a rat creature jumps into a toilet, causing brown liquid to splash out." Instant gold, metacritic will be ablaze for sure. 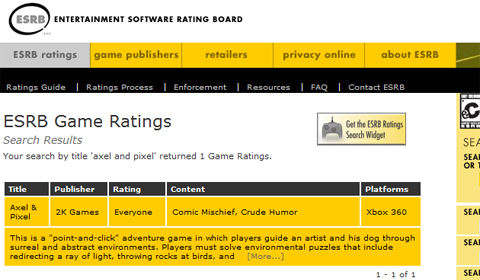