26 August 2009 | By Simon Priest
An advertisement from Target that's believed to go live August 30th clearly shows the Xbox 360 Pro reduced to $250 while the bigger Elite model climbs down to $300.

If this holds true then an announcement from Microsoft should be coming soon, but a drop in price for Euro or the UK isn't as secure. Rumours suggest an Arcade price hike in the UK.

"The USD 299 price point will likely become the new standard for the next generation consoles for the next year," said EEDAR's director of analyst services, Jesse Divnich.

The two shots of the advert, which Engadget received, shows the 120GB Elite is down from $399 to $299 and the 60GB Pro has dropped $50. It's also thought that Microsoft will be working to discontinue the Pro model, and embrace the Elite in its stead.

British retailers have recently said they were to get ready for an increase in price for the Xbox 360 Arcade, with Microsoft raising it from £129.99 to £159.99. This was to counteract the pound-to-Euro exchange rate, said one independent retailer.

With Sony announcing their price cut at GamesCom, many expected Microsoft to reveal their own and maybe steal a little of their rivals thunder - but nothing was mentioned. Bubkis! 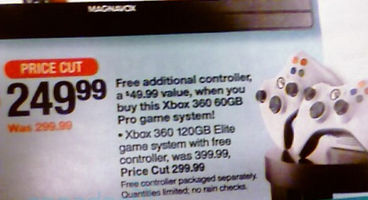 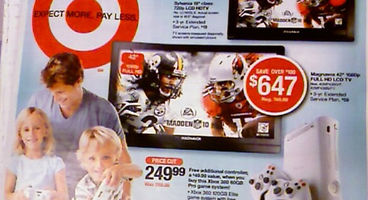