Sky Player is a go on Xbox Live, airing 24 channels to subscribers

27 October 2009 | By Simon Priest
It's finally here but Microsoft can't breathe a sigh of relief yet, having secured yet another source of subscriber revenue, because the Sky Player is experiencing some outage.

In fact it's crashing quite a bit according to user reports. It doesn't stream channels in HD sadly, and that's because Britain's broadband is "simply not good enough" says Sky.

The Sky Player service is available to Xbox Live Gold subscribers with either a Sky TV package or Sky Player subscription in place. On offer are channels like Sky One and MTV, among many others. If you're non-Sky TV then it's £15 a month for the Entertainment bundle.

It'll cost even more if you want sports channels on top of that, by way of an additional £19 a month - a very expensive way to watch Sky channels, and with no HD option.

"For BSkyB it offers further evidence that its future subscriber growth is not dependent on its traditional satellite set-top box strategy," said Sky's David Mercer.

"For Microsoft it is further confirmation that the Xbox is on its way to becoming not just a games console, but rather a complete home entertainment system."

"More channels are being added all the time and we're confident terrestrial broadcasters will join," chipped in fellow Sky man Griff Parry. Can this service ever be value for money?

It's an awful lot of cost for so little if you're not a Sky subscriber already. The 'no high-def' broadcasting is a major blow, even if it is because of the UK's 'lousy' broadband infrastructure.

Xbox reveals that the service*, the first of its kind on any games console, will give Xbox LIVE users full access to all the live and on-demand channels currently on Sky Player. This includes popular, hit TV shows from Sky1, blockbuster films from Sky Movies and must see-entertainment and documentaries from MTV, Disney, G.O.L.D, Sky Arts, Nickelodeon, National Geographic, Eden and History. In addition, sports fans will be able to enjoy the biggest sports events - as they happen - from Sky Sports, ESPN and Eurosport.

Subscribers to the Xbox LIVE gold service will also be able to enjoy a range of interactive features to enhance their viewing with friends and family. For example, viewers will be able to use their Xbox avatar in the ‘Avatar Party Mode’ to watch live TV alongside their friends’ avatars. Once there, they will be able to chat live and interact with each other through their Xbox – yet another feature that makes Xbox LIVE a fun, social experience whether you are together with friends or wherever they are located from London to Limerick.

As well as 24 live streaming channels, Sky Player offers thousands of hours of on-demand programmes, making it the most comprehensive web-based on-demand service available from any UK and Ireland broadcaster. There are over 400 movies to watch at anytime from Sky Movies, over a thousand sporting highlights from Sky Sports, and hundreds of other programming highlights spanning entertainment, drama, comedy, music, documentaries and kids.

To watch Sky Player on Xbox 360, customers will need an Xbox LIVE Gold membership. Non– Sky Direct to Home (DTH) customers will also require a monthly subscription which starts at £15 per month to Sky Player’s Base Entertainment Pack. Customers who want to watch Sky Sports 1, 2, 3 and Xtra, ESPN and the Sky Movies channels will be able to add these channels to their Base Entertainment Pack for an additional cost. In addition to the live channels, customers will also have access to on-demand programmes from channels they subscribe to.

Sky Player is the latest addition to Xbox LIVE’s ever increasing range of entertainment. From enjoying high definition blockbuster movies, watching the best music videos, video chatting to friends, or playing games with people wherever they are, Xbox LIVE offers the best entertainment whether you’re into gaming or not.

Neil Thompson, Senior Regional Director, Entertainment & Devices for UK & Ireland at Microsoft commented: “Today our customers enjoy film, music, videos and games on Xbox 360 and TV is another significant step forward in our entertainment vision. And now Xbox owners will have the variety and volume of entertainment along with unique services such as the avatar community which allow you to share, celebrate and chat – it is clear that Xbox 360 is taking entertainment beyond the living room with unique social interactive entertainment experiences.”

Griff Parry, Director, On Demand, BSkyB added: “Today’s launch marks the first time premium live television is available through a broadband-connected games console, helping transform the way entertainment fans watch TV. At Sky, we believe in innovating for customers so they can enjoy the content they love how they want. Whether that’s through their Sky set-top box, computer screen, Xbox 360 or mobile phone, customers have never enjoyed more choice, control and flexibility.”

David Mercer, Principal Analyst - Digital Consumer Practice at Strategy Analytics comments: "The introduction of Sky Player on Xbox is an exciting development for both companies. For BSkyB it offers further evidence that its future subscriber growth is not dependent on its traditional satellite set-top box strategy; and for Microsoft it is further confirmation that the Xbox is on its way to becoming not just a games console, but rather a complete home entertainment system." 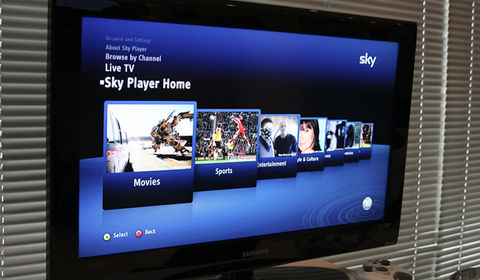