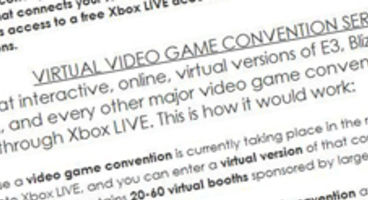 Microsoft has its thinking cap on with all those who can't make it to videogame conventions, like E3, somehow making it after all. Well, sort of.

Imagine, if you will, "that interactive, online versions of E3, BlizzCon, GamesCon, ComicCon and every other major video game convention were made available through Xbox Live," reads the survey, reports CVG. Supposedly all free for Xbox Live.

Walking around with your avatars you can experience all the videos, trailers, interviews with developers, and possibly even demos and betas of games. All the big speeches, those keynote thingies, would also be streamed live to the console.

Sound like your kind of convention? The one without bleeding ears or a thumbing head afterwards? If it does happen let's hope it stays free.