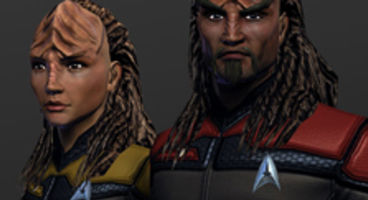 Developer Cryptic Studios is launching Star Trek Online around the globe, so naturally diverse player avatars are a must - and so is profit.

Most pre-order packages for the MMO include free Cryptic Points, which can be spent on newly available races via the Cryptic Store.

"Not every Klingon warrior yearns to serve the Empire. Purchase of this option allows you to create Klingon Federation Officers," reads the official Star Trek Online site.

You can now buy two new races which means you can create a Captain from a wider selection of species. The two up for grabs are Federation Klingon and Federation Ferengi, for 240 and 80 Cryptic Points respectively.

Some users have used the phrase "nickel-and-diming us", in criticism of Cryptic's decision to micro-transaction more races, reports Massively. Each of the two new races come with inherent bonus traits and so aren't entirely cosmetic.

Should studios keep micro-transaction out of monthly subscription MMOs?