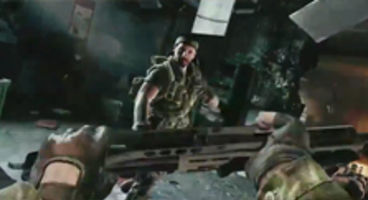 Aside from the obvious singleplayer and multiplayer flavours you'd expect from Call of Duty: Black Ops, Treyarch have also added in multiple co-op.

They designed them for when you just want to "have blast with your friends," sitting on the couch. Mark Lamia wouldn't talk of Commie zombies.

"Single-player is the epic, cinematic, seat-of-your-pants thrill ride that you star in. Then there's multiplayer, when you want to play competitive with your friends and really chisel and hone your skills and do that addictive experience," Treyarch boss Lamia told MTV.

There's to be no co-op during the main campaign, but the studio has some tricks...

"And then co-op is for when you want to have a blast with your friends, just sitting on the couch and having an awesome co-op experience. We're crafting unique co-op modes around that experience, but it is different than what people think."

He confirmed that "it is different than Spec Ops," the Infinity Ward developed co-op mode for Modern Warfare 2 with 4-players. As for if Black Ops will have some Commie era zombies... only Treyarch knows that answer and they aren't telling.

Do you enjoy co-op modes, videogamer?