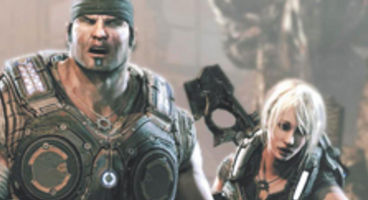 A Russian games magazine has an eight page spread for Epic's Gears of War 3, detailing some of the improvements and spilling locations.

One such shot in the mag shows a man-made island, which is where the game will mostly be taking place it's believed. We also get a big mech!

The mag issue gives us a real-time shot of Marcus and Dom in the third instalment, which is the first ever of the dynamic duo on this man-made island. It also compares bits between the 2nd and 3rd game, showing us where improvements have been made.

The last page in the Russian mag shows us a 'C.O.G. Silverback' mech that we most likely get to stomp around in and squish Locust. Gears of War 3 releases exclusively on Xbox 360 April 8th, 2011 in Europe and three days earlier in the US.

Check out the Russian mag scans over at All Games Beta.