Battlefield has "always been deeper", not just about maxing score 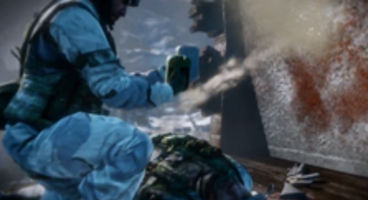 Those other FPS games out, with online? They're shallow compared to Battlefield, says Bad Company 2 producer Karl-Magnus Troedsson.

He doesn't "want to judge" others but reckons the Battlefield team has it right when it comes to online play. They got shock paddles and junk!

"Well I wouldn’t say ‘wrong’ – I don’t want to judge people, other games like that," said Troedsson, asked what other FPSers were doing wrong online by FPS Gamer.

"But for us – multiplayer, online play, we’ve been doing that since Battlefield 1942, and to us it’s open environments, it’s sandbox, it’s team play," he said. "Because team play – what we’ve done in Battlefield for a long time is team play.”

“You play as squads, you play teams, it’s very important. A lot of the other shooters are still actually in team deathmatch mode – they have tons of different game modes, but they all one way or another are just people playing to get the maximum score."

Did I just detect a smattering of judgement there, Troedsson? "This game is deeper, and Battlefield has always been deeper, and that’s due a lot to the gameplay. Like for instance you can heal each other, you can give each other ammo, you can revive each other – we’ve got the shock paddles in now.” The hype machine is on full whack from EA.

Battlefield: Bad Company 2 is releasing on Xbox 360, PS3 and PC March 2nd in the US, and on the 5th in Europe. Check out the multiplayer teaser clip below.