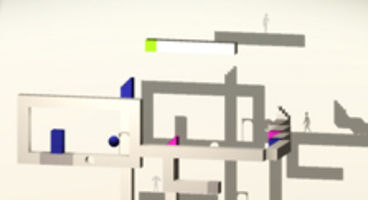 The physics puzzler echochrome returns this December 21st reveals Sony, and we'll be leading our wooden mannequin through 100 different levels.

Each has 3 ways to complete them apparently, and PlayStation Move can be used as a 'flashlight' to reveal solutions to puzzles and complete the level.

"The blocks and objects you see in each level will cast different shadows depending on your movement so as you alter the perspective and angles by adjusting this light source, you will manipulate the shadows they cast to ultimately reveal a solution to the puzzle and guide your character to the exit," posted SCEA producer Kumi Yuasa.

The sequel has "100 built in levels and there are three different ways to enjoy each one." The game has escort, echo and paint modes to solve levels. "Navigating the character to the goal by creating a shadow path is called “escort” mode," explained Yuasa.

"In “echo” mode, the objective is to collect the ghost-looking characters called “echo.” You will see a few of them in each level, so collect them all to clear the stage."

"Each time you color a block, your clear percentage will increase. Your goal is to reach the target percentage to clear the level," they continued. Releasing for the PlayStation Network, echochrome II will be out in the US December 21st. Check out the trailer.