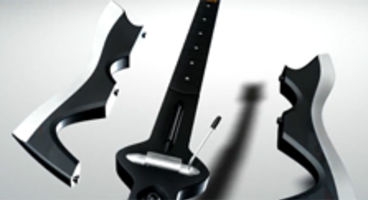 Who wants brand new guitar peripherals with swappable body designs? You do, declares publishing giant Activision. They're out this autumn.

These new axes of rock will ship with Guitar Hero: Warriors of Rock this fall, but don't worry because your old tatty one will work just as well.

This new design moves all the controllers electronics into the neck of the plastic guitar peripheral, which frees up the base to be milked customised by the consumer - that's you! Activision has even released a trailer to show off these new designs.

Guitar Hero: Warriors of Rock releases on Xbox 360, PS3 and Wii this autumn. You'd best pick up one of these new things or else Activision might think you're 'uncool' - you don't want to be thought of us uncool and out of touch with consumer gouging do you?