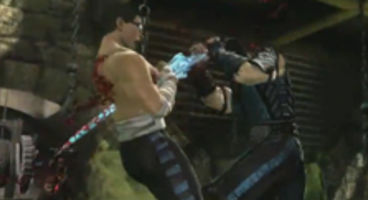 Warner Bros., the new owner of the Mortal Kombat IP since Midway Games collapsed, has announced a reboot for the long-time fighting series.

Who needs simple 1v1 fatality fights these days when you can tag in a buddy to pound the face of your opponent too - that's NetherRealm's thinking anyway. "We can’t wait for players to get their hands on Mortal Kombat,” said Boon.

“This game really is a response to what players have been demanding: mature presentation, reinvented 2D fighting mechanic and the best, most gruesome fatalities ever!” Yes we gamer types are real sticklers for our brutal videogame decapitations.

This royal rebooting will also mean "the deepest story mode of any fighting game," proclaimed the Warner Bros. press release. A trailer has also been aired because when it comes to fighting games it's best to let pixels do the talking.

"Up to four players can battle “tag-team”- two players can team up in the new “Co-op Arcade Mode” or compete against another team online," added the press announcement.

Mortal Kombat releases on Xbox 360 and PS3. Check out the spine-tingling trailer.