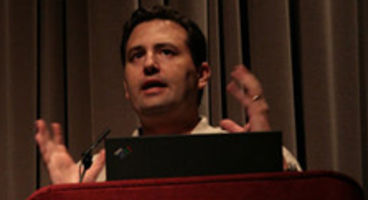 It was "completely rude" says Rein that he interrupted the indie developers, no matter "how well intentioned" his comments. He ran his "big mouth".

This comes in response to Positech's Cliff Harris laying into the big studio owner by way of his blogsite, who took big exception to how Rein interjected his views on the panel.

"I want to apologise," began Rein's email apology to Harris, reports Develop. "It was completely rude of me to interrupt your panel with my opinion no matter how well intentioned." It happened when the indies talked about the benefit of one-to-one communication they can have with customers.

"I'm supremely passionate about the plight of indie developers, and game developers in general, and I heard something I thought was incorrect advice and I just couldn't keep my big mouth shut," continued Mark 'big mouth' Rein.

"But there's no excuse for bad manners. You called me on it and it made me realize that it is a behavior I need to try and change for these types of events in the future."

"It's not like some great injustice was being done and needed commentary from me. I was just being a jerk," added Mark 'big mouth jerk' Rein. The full copy of the lengthy email sent to Positech's Harris can be read over on Develop.

"Good luck with your studio and games in the future. If you'd like to discuss this by phone I'd be happy to speak with you. I'll try not to be a "triple-a studio jerk", concluded Epic's Mark 'big mouth triple-a studio jerk' Rein. Peace falls over the land of indie once more.