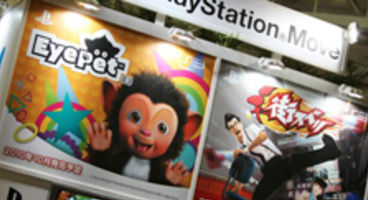 Sony let the Japanese public get some hands-on time with PlayStation Move at the World Hobby Fair in Tokyo recently, which is held twice a year.

A live demo of EyePet and Slider were played on stage with people asked to join in, along with kiosks set up playing the two titles. It's out September.

In Europe PlayStation Move releases September 15th and in the US on the 19th, while Japanese gamers will need to wait longer until October. Sony also showed some of Patapon 3 at the event which is likely to be real big when it retails in Japan.

During E3 Sony had a special event deal going with a major US retailer letting the American public sample some of PlayStation Move for just one day, with early uptakers getting a coupon for some free food from Subway.