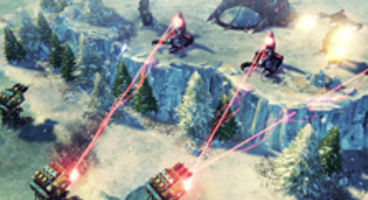 Publishing giant EA has confirmed that Command & Conquer 4 won't be supporting dedicated servers or LAN, because of 'progression'.

Across all C&C4 game modes player progression "is stored in a server," ruling out unofficial play. EA has "completely redone" the network backend.

Player progression in the latest Command & Conquer runs "across single-player, multiplayer and skirmish and all the information is stored in a server," said lead designer Sam Bass, reports Destructoid.

"So if you go to another machine -- friend’s house, Internet café -- whatever, you can login with your profile and all the stuff you’ve unlocked is accessible to you there. It all lives on a server so you can’t really do dedicated servers with that."

The dev team have "completely redone the networking back end of this game."

Others had the dated multiplayer infrastructure but this new method is "a lot more solid, a lot more modern. There's a really solid networking and just sort of getting into a game is much easier then it was in the past." The system sounds somewhat familiar...

Let's hope in order to play the game at all you aren't required to login to EA servers, much like Ubisoft's new DRM solution demands in order to even start titles. Assassin's Creed II for PC has been confirmed to carry this new Account Rights Management.

Does Command & Conquer 4: Tiberian Twilight appeal to you, videogamer? It releases exclusively on PC March 5th. Check out the trailer below.