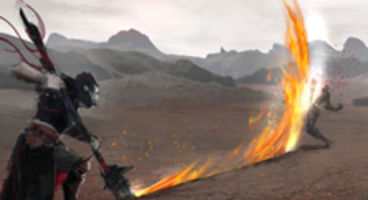 A recent IGN piece on BioWare's upcoming Dragon Age 2, set for release next year, reported that only 3 dialogue choices were involved.

BioWare responds saying they're "not really sure" how they concluded that. They're also "not locked" to icons in the wheel. They're narrative "gymnasts."

"We put up to 5 choice options and 5 investigate options per dialog node," posted BioWare developer Craig Graff on the official website in response to worried fans.

"There is also a difference between choices (where you are actually deciding something) and giving you the opportunity to express yourself in different ways (which I think is quite cool, but not something I believe we have released any details on yet)."

David Gaider added: "There are some extra ways that your dialogue can change, as well, based on what Craig said-- but, again, we're likely to talk more about that in the future."

"I'm not really sure where the "there are only three options for dialog" impression they got came from. Perhaps it was when I showed one half of the dialog wheel with three options...which, you know, leaves another half open for...you know...other....options," noted fellow developer Mike Laidlaw.

"Also probably worth noting that we're not locked into specific icons per place in the wheel. Oh no. We have -much- more flexibility than that. We're like gymnasts." According to the preview piece we had only 'good', 'nasty' and 'badass' responses, depicted by an olive branch, a Greek comedy mask and a red fist respectively.

"I imagine that's the only dialogue he saw? The demo is pretty action-packed and there's only the one conversation-- which, yes, has three options in it. As has been said elsewhere in this thread, however, that's not all we're limited to," added Gaider.

"The personality options (which the article mis-characterizes, I'm afraid-- they may have been more his impression of the lines he saw rather than our explanation of them) have a bit more complexity as to what they affect. That's probably part of a larger conversation, however, so we'll talk about it at length later."

Well there you go - we've got plenty more to say in Dragon Age 2 assures BioWare. The dialogue wheel is based off the same design from Mass Effect. BioWare is also using it in their upcoming MMORPG Star Wars: The Old Republic.