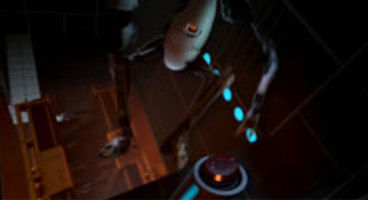 Valve says they had "for a little while" competitive multiplayer in Portal 2, but it just "devolves" away from puzzle-solving and turns chaotic; unfun.

So the team decided on co-operative multiplayer instead which is "much more rewarding" as you work to unravel the puzzles. Maybe as DLC?

"Along with co-op," Valve had "the idea of sort of a competitive Portal multiplayer," said studio writer Erik Wolpaw. Portal 2 is also releasing on the PS3.

"We went down that path, actually, for a little while and had something up and running -- the best way to describe it is sort of speedball meets Portal. You know, a sports analog. And it quickly became apparent that while it's fun for about two seconds to drop portals under people and things like that, it quickly just devolves into pure chaos."

"It lost a lot of the stuff that was really entertaining about Portal, which was puzzle-solving. Cooperative puzzle-solving was just a much more rewarding path," he added.

The competitive mode had one player try to get a ball from one end to another while the rival tried to stop them, for example by Portal shooting them to the ground. Unfortunately the actual practice of the mode "was a hot mess." Valve does love DLC so... ?