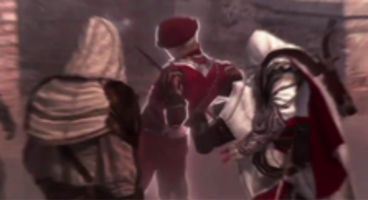 Sorry 14 year-olds but you can't buy Assassin's Creed: Brotherhood in the UK as the BBFC reveals its certification as 15 for "strong violence and language".

The ratings board also dished that the game has 150 minutes of cutscenes. Brotherhood is a bridge of sorts between AC2 and AC3, following Ezio again.

"This work was passed with no cuts made," reports the BBFC website, which is always a good statement to read. "Contains strong violence and language," it added.

Assassin's Creed: Brotherhood releases on Xbox 360 and PS3 November 19th, while a PC version is being developed but got delayed until spring 2011. Multiplayer is included this time around, while singleplayer features a huge upgradeable city of Rome.