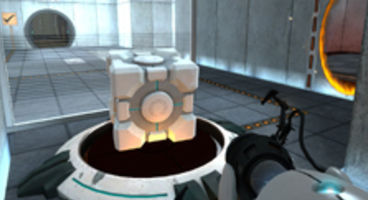 Valve has teased that if they were ever going to support PlayStation Move or even 3D, then it would have to wait until next time with Portal the 3rd.

Doug Lombardi also said "who knows" about a possible Left 4 Dead future on the PS3. Well you would know Mr Lombardi, so quit teasing already!

Now that Valve has a dedicated PlayStation 3 development team it "allows us to build our PS3 products internally, which we feel is critical for delivering the highest quality version of our products," said Valve boss Lombardi.

Move and any 3D plans "will have to wait for Portal 3 or another title," he said. "We won't be supporting those in Portal 2." Okay so what about other Valve titles coming to PS3?

"Who knows what the future will bring?" was his reply to the Left 4 Dead question. Portal 2 releases on Xbox 360, PS3 and PC later this year. Given the furore over the announcement of Left 4 Dead 2 by the L4D community, it's wise to keep a 3rd quiet.