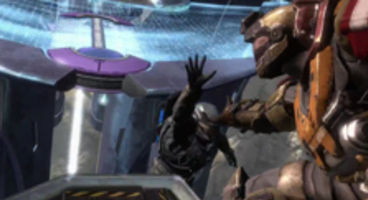 Prepare yourself 'lucky winner' of Microsoft's Halo: Reach competition this summer, because while 5 of the 6 of you get to form a super team...

...the other 1 gets stuck holding the hands of celebrities. Reach matches will play throughout August to find 6 top Halo gamers in Britain.

The one to lead the famous people will be a part of the Elite Spartan Squad. When Halo: Reach retails September 14th these two teams will face off. It was Manchester United footballer Rio Ferdinand and The Gadget Show's Jason Bradbury who revealed the competition on Microsoft's behalf.

Yeah that's right, the 'lucky winner' gets to slap Ferdinand around, albeit virtually. Also part of the celeb team is Channel 4's Jameela Jamil, England rugby star Ben Cohen and one more placement that remains a mystery for now.

"We can't wait for this young man or young lady – whoever it's going to be they'll be young, younger than us – to come in our squad and lead us," said footballer Ferdinand, dreaming of possibly getting to win a match for change, unlike a certain World Cup.

"His or her voice won't be as deep as ours. They'll be squeaking and telling us exactly where to run and who to shoot." Yes said 'squeaker' will be responsible for whipping these no good, over paid and well known people into shape.

"When we're changing nappies and putting our kids to sleep they're gaming. They're ahead of us. They've got more hours in the game," he said. "We're playing catch-up all the time. But the talent we possess, we're not far behind."

What does the footballer think of Halo: Reach? "I'm really excited," he said. "I just love the team games. That's what I try and play online a lot of the time. The brilliant thing about online is you can speak to people."

"It's like playing football. When people are doing stuff wrong you can tell them."

"Because people don't know who I am online, because my Gamertag isn't Rio Ferdinand, you can shout at them. I can scream at them. If we're losing I can go bananas." He must have been paralysed with rage after England crapped out of the 2010 World Cup.

No Ferdinand doesn't reveal his gamertag, although it's not far off from his name apparently. "It's similar, yeah. I don't want to give it away." Microsoft proves once again they love a good PR whoring to rich and famous types for a game launch.

Are you in Britain and just dying to school some celebs in Halo?