01 June 2011 | By Jonah A. Falcon
Age of Empires Online will be officially launched on August 16, and will launch with the Greek and Egyptian civilizations. The "freemium" MMO strategy game will be available in retail and online. The game, which will initially launch with the Greek and Egyptian factions, and can be downloaded from www.ageofempiresonline.com.

Microsoft claims the freemium title will offer "more than 40 hours" of free co-op and competitive gameplay, but Premium Content will be available for under $20, which will include more civilizations and allow gamers to start immediately at level 20 for "expert play".

Let us know if you'll be sampling the game, which is a part of a series of classic strategy games being made into browser-based games, such as Heroes of Might & Magic and Civilization. 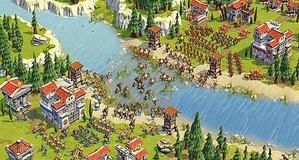