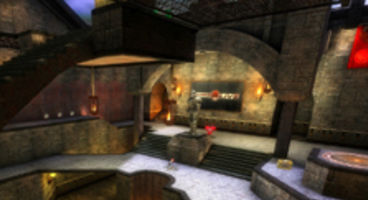 The latest major update to Quake Live is now up and running with two new Premium Arenas, and new Start-a-Match features for Pro Subs and FreezeTag.

It's called the 'Quake Live Premium Pak 8' update and it's in full swing. Bethesda detailed the changes on their fancy blog site. It's quite a lengthy update to the online shooter based in that iconic Quake universe - the very birth place of the first-person shooter.

Below is the full changelog.

Crafted by Wiebo de Wit, designer of the highly popular ‘Overkill’ Clan Arena level of RA3 fame, Revolver is a small outdoor chamber with an overhanging grated walkway, a higher ground that holding can prove vital to victory.

Set in a foreboding dungeon, Sorrow is a brand new arena from Pawel Chrapka that is nicely suited for both Duel and small teamplay when a more strategic and paced style of play is preferred.

Server tool tip hovers now report if a server is Premium, allowing you to identify Premium servers when using the Friends List.

Accepting a friends request from a player who is actively online will now immediately show them on your friends list. Previously they would not show until their next time to come online.

Fixed banned profile notices. Banned players will once again have a ban notice on their public profile.

Weekly match stats now report up to 500 matches, it was previously limited to reporting only the first 100 matches played in any given week. (Fixed earlier but hadn’t been reported to the changelog.)

Fixed issue preventing pro users with clan tags that began with a ‘+’ from spinning Start-a-Match servers that others could join.

Added ‘forfeit’ command to allow for an early end to a match. Available to the losing player in Duel

Available to the losing player in team gametypes, when one player is left remaining.

Will end match immediately, note the game is forfeited, and award the loser a ‘Loss’ instead of a ‘Quit’.

Added a forfeit condition check to all team gametypes. If one team quits, the match will now forfeit and award a win to the remaining team.

Improved Intermission Delay, the delay has been reduced from 1000ms to 200ms to resolve many issues & complaints about what occurs in the last second of gameplay.

Added the option of a simpler black frame fill rather than the white flash that occurs when teleporting (r_teleporterFlash 0).

Added an error message to clients when some commands, such as ‘/kill’ are attempted to be used on servers that do not support them.

Colliding into a wall while running now places the player in a walking animation without footsteps, instead of running in place and producing footsteps. (This is an animation and footstep change only, no change to player speed, physics, or movement is made as a result of this).

We now disabled firing at the end of warmup during match countdown to raise awareness of the match state transition and reduce accidental movement caused activity during the match countdown.

Fixed the toggling of ‘Next Match’ at the end of the match such that spectators can no longer toggle the readyUp status of in-game players.

Fixed 3 Player Callvote logic that was allowing a single ‘no vote’ to make a vote fail.

Fixed an issue that could generate killbeeps from gibbing player corpses.

Fixed incorrectly defined FRAMETIME, which has accounted for various bugs or oddness in the game, especially in relation to our triggers (jumppads, movers, buttons, trigger hurts, trigger multiples).

Fixed Battle Suit noise spam while wading in lava, sound event is now only triggered every second (damage is however still continuous).

Fixed Default model/skin code. It will now attempt to use the model specified when a valid model but invalid skin is set and ensures that a teamskin is set when in team gametypes.

Fixed an issue with railgun while using infinite ammo that prevented the rail trail from displaying.

Fixed an animation issue that would occur on servers running more than 24 hours that previously could not be resolved without shutting down and relaunching the server.

Fixed an exploit found that could be caused by use of a local command.

Fixed references to server framerate to correctly account for timescale.

Fixed Vertexlight issue in map compiling. We will over time be re-releasing the afflicted maps to resolve dark or off-colored vertexlighting issues.

Relaxed spawn system in Duel such that it now looks at 50% of the furthest away spawn choices with a minimum of 3 choices, instead of 40% with a minimum of 2 choices — reducing the predictability of where a player may re-spawn.

Added Teamkill Complaint system: When a player is teamkilled they will now be prompted as to whether or not they wish to file a complaint to the server verse the offending teammate. If you feel the TK was intentional, then file a complaint (F1). If it was accidental, then dismiss it (F2). If too many complaints are filed verse a player, the server will ban the player for the server for the remainder of the match. Clients may disable the complain/dismiss vote prompt by setting cg_complaintWarning 0.

Fixed a warmup condition in TDM that allowed you to start a match when no players were present on one of the teams.

Fixed a warmup condition in TDM that allowed you to start a match with unbalanced teams.

Fixed CA round behavior when roundtimelimit is set to 0, which will now disable the use of a roundtimelimit rather causing rounds to end immediately upon round start.

Fixed capturing the flag during the Intermission Delay bug, you can no longer capture in the last moments of the game after the time/scorelimit was hit.

Added ‘droppowerup’ command to allow you to drop a recently picked up power-up to a teammate. Like weapons and flags, the dropped powerup remains available for 10 seconds.

We now use “You froze” centerprint in FT rather than “You fragged”.

We no longer allow you to thaw teammates through walls.

Frozen ice blocks now shrink as a player is thawed.

Added Start-a-Match options for Pro Subscribers: ‘Environmental Respawn Delay’, allows you to force a time delay before a player who died from an environmental death (such as jumping into a void) from thawing and respawning.

‘Reset Armor on Round’, allows you to force a player’s armor value to reset at the end of every round.

‘Reset Health on Round’, allows you to force a player’s health value to reset at the end of every round.

‘Reset Weapons on Round’, allows you to force a player’s weapon loadout to reset to the spawn loadout at the end of every round.

‘Thaw Winning Team’, allows you to prevent frozen members of the winning team to from instantly thawing at the end of the round, forcing the surviving winners to thaw their own frozen teammates.

‘Thaw Tick’, allows you to control the audible thaw sound such that it can be heard by only teammates, all players, or disabled.

‘Enable Round Delay’, allows the 4 second round delay to be disabled, allowing for a more action packed fast paced style of FT gameplay.

Thaw messages are now displayed for players who die due to an environmental death to denote when a player is back in action and no longer considered frozen.

Fixed Round Draws in FreezeTag. Announcer Voice is back and notifies you when there is a Round Draw. Neither team is awarded any points during a Round Draw, previously red was awarded a point during draws.

Added prediction to triggers for frozen players (smoother triggering of jumppads, teleporters, doors while sliding into them)

Fixed AutoThawTime behavior so that you may disable autothawing. Previously a g_freezeAutoThawTime 0 would result in an instant thaw upon freezing.

Instagib is no longer is restricted to Railgun only, but now works with any weapon defined in g_startingWeapons. This allows us to introduce a great number of new InstaGib modes of play.

Instagib no longer relies on damage output of any weapon. If damage is received it will gib the player (railgun is no longer forced to 666 damage).

We now grant infinite ammo for all weapons present in InstaGib

Extensive overhaul of the InstaGib code to improve logic, performance, and reduce rare issues that could result in players not dying when hit.

Fixed an issue with in_nograb not being properly defined, that resulted in mouse sensitivity issues and mouse focus issues.

Reworked mouse accel code to address outstanding issues such as: framerate dependency, a failure to preserve directionality, and misleading offset behavior. Now rather than offering two styles of mouse accel, one without these issue but fewer options and one with more options but known issues, we have now simplified it to one accel scheme that is highly customizable and reliable.

Added cl_mouseAccelPower // the power of the accel curve, 2 is the default traditional curve.

Default sensitivity, pitch, and yaw all remain the same. If you do not set m_cpi no changes are necessary to your mouse or sensitivity settings. If you use accel, you no longer need to specify a style of accel. Set your cl_mouseAccel to the desired strength, optionally assign a cl_mouseAccelPower, cl_mouseAccelOffset, or cl_mouseSensCap.

Support for Infinite Ammo on weaponBar.

Support for non-railgun weapons in InstaGib

Changed frag obituaries to fade out

Fixed roundtimer display in FT on the official ‘Large’ HUD.

Reduced the size of the center print frag message in warmup, to both match the size utilized mid-game as well as prevent center print text from overlapping during warmup.

Added a ‘Watch your fire!’ warning to the center print frag message when you kill a teammate.

Fixed itemPickupTime between map_restarts: Pickup messages will be cleared from the screen on map_restarts and when transferring from Warmup to Match-in-Progress; Can no longer obtain

Obituary frag messages are now cleared from the HUD on map_restart.

Improved the formatting of the low ammo warning centerprint; raised it higher to avoid some overlapping text in warmup.

Fixed weaponBar weapon registration, so that you no longer have to switch to a weapon before it appears on the weaponBar.

Fixed the map order (in callvote menu), Hektik was out of abc order.

Added con_scale (defaults 1.0), lower values result in a smaller font scale being used in the console.

Added ‘bot_teamkill’; Activates teamkilling mode where bots disregard what team a player is on when selecting their targets.

Fixed BotChat_HitTalking MOD (a bot’s knowledge of what they were hit with while they were chatting).

Removed deprecated g_weaponTeamRespawn, referenced only in Team DM, in favor of setting g_weaponRespawn.

Removed cg_startingammo_mg, we are in the progress of replacing it with a new weapon neutral g_startingAmmo system. 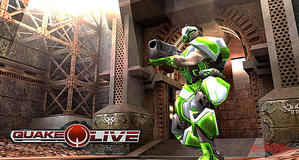