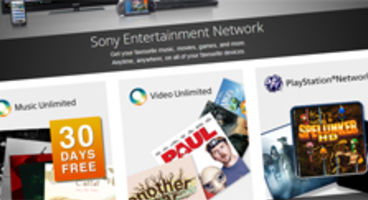 Sony's Kazuo Hirai has announced the formation of the Sony Entertainment Network which encompasses all their online services under a single banner.

Music, video and games are all carried now by the Sony Entertainment Network which will also support third-parties. SEN will be integrated into all products.

A website for the Sony Entertainment Network is already running with music, video and PlayStation Network games available. Sony plans to let third-parties join the new consolidated network service platform which will spread to all Sony electronic products.

This will "accelerate the integration of hardware, content, and network," proclaimed Hirai. The top executive is the first to lead all of Sony's consumer products. "The whole of Sony is greater than the sum of its parts," he added.

The Qriocity brand has disappeared, replaced by Video Unlimited and Music Unlimited.