The latest Bulletstorm trailer mocks the Call of Duty franchise with "Duty Calls", with an potshot taken at the Fallout series as well ("War never changes").

The trailer instructs you to go to www.TheDutyCalls.com, which is basically a place to download a 759MB file which is a full-on merciless parody of Call of Duty. It isn't done with the Bulletstorm engine, either. It's just to show how awesome Bulletstorm is in comparison with the video at the end of the parody. 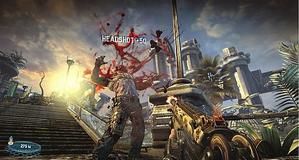