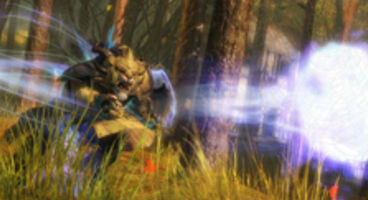 ArenaNet defends its previous claims that Guild Wars 2 has no dedicated healer/tank classes, and affirms it "built a combat system that just doesn't allow it."

Designer Jon Peters points to the cross-class features, like dedicated healing slots and being able to revive fallen comrades. Eyes on action, not numbers.

“So much for no Holy Trinity,” we’d hear. “Guardian is a paladin, dedicated healer, monk, tank…”," blogged Guild Wars 2's Jon Peters. "Our professions aren’t dedicated healers, DPS, or tanks because frankly, we built a combat system that just doesn’t allow it.”

"Everyone has a dedicated slot on their skill bar where they must place a healing skill. These vary greatly and are an intimate part of the Guild Wars 2 build-making process, but ultimately they are your most efficient and reliable way to sustain yourself in battle."

"Why did we do this? Because we think it is a more interesting way to create sustained encounters for solo players AND groups while keeping players focused on themselves and their surroundings," explained the game designer.

Everyone knows their CPR in Guild Wars 2. "From level 1, every profession has the ability to revive everyone else. This means that players don’t have to rely on one profession in case someone is defeated both during and after combat."

"There are no skills that specifically target allies. Everything must be done using positioning, ground targeting or other unconventional methods. This keeps every profession focused on their allies in the world, which adds a tactical complexity to the combat," adds Peters.

"Instead of watching red bars, we want you to watch your allies in the world. Making sure you are dropping ground-targeted spells effectively and moving into position to block attacks on allies is how we want players to defend each other."

This is certainly a step away from the staple MMO formula. Check out the full blog post from game designer Jon Peters. Guild Wars 2 releases on PC sometime in the future.