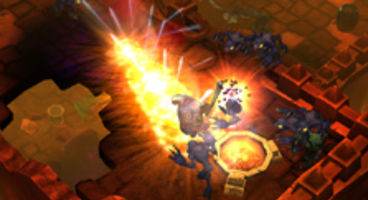 He only sees it "as a good thing" for the genre, and therefore Torchlight 2. It'll "delay whatever we're working on", he jokes. The MMO is still planned.

"A lot of people say, 'what are you going to do when D3 comes out,' but I only see it as a good thing," said Runic Games' Max Schaefer. Torchlight is an action-RPG very much akin to Blizzard's hit Diablo series, except Torchlight is all dungeon.

"We kind of can't wait for D3 to come out. It'll delay whatever we're working on for at least a month when it does! But at the same time we've just got to be doing what we're doing," he adds. The attention Diablo III draws will boost Torchlight 2's profile as well.

Right now Runic are busy with PC Torchlight 2 coming this summer, "beyond that, we'll see where we can see the Torchlight franchise down the road." The studio remains small at 30 developers so they're focusing on one project at a time.

They didn't want the MMO "to totally take our studio down while we're trying to do Torchlight 2," explained Schaefer. Torchlight has recently re-released for Xbox Live Arcade.

Are you looking forward to Blizzard's Diablo III? Has the craving for more Diablo slaying led you to the colourful mines of Runic Games' Torchlight for relief?