04 November 2011 | By Jonah A. Falcon
Hello Games' Sean Murray blasted Microsoft in July, explaining why Joe Danger was released on PlayStation Network, "Why choose PSN? It was the only way we could self-publish. XBLA is kind of a slaughterhouse for smaller developers. There are games that do amazingly well. But there's two titles released every week and a lot of those are falling in that 25,000 or less category."

Today, Joe Danger: Special Edition was officially been announced for Xbox Live Arcade, after being leaked by the Korean ratings board.

Joe Danger: Special Edition will feature new challenges, gameplay modes and "some awesome playable characters to unlock." The new version is exclusive to Xbox Live Arcade and will be released before the end of the year.

For a sampler of gameplay, check out the trailer below. 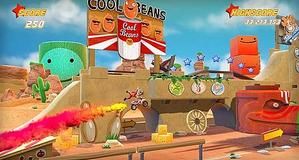