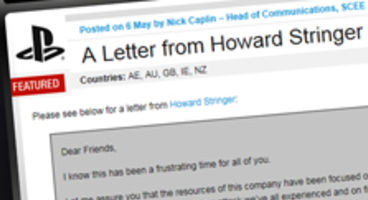 Chairman, president and CEO Howard Stringer of Sony has issued an apology to all PlayStation Network and Qriocity members, promising action.

He affirms they told users as early as they knew the facts, and also echoes previous statements that "no confirmed evidence" exists of stolen credit cards.

The PlayStation.Blog was the site for the apology from Sony's big boss. The corporate giant is in a heap of trouble with major institutions right now, including a US Congressional hearing. Frankly it makes the legal spat between Sony and George Hotz look tame.

Sony is said to be in the 'final stages' of returning PlayStation Network to full operation, which includes all-new security measures to protect and hopefully encrypt data.

Here's the apology in full:

I know this has been a frustrating time for all of you.

Let me assure you that the resources of this company have been focused on investigating the entire nature and impact of the cyber-attack we’ve all experienced and on fixing it. We are absolutely dedicated to restoring full and safe service as soon as possible and rewarding you for your patience. We will settle for nothing less.

To date, there is no confirmed evidence any credit card or personal information has been misused, and we continue to monitor the situation closely. We are also moving ahead with plans to help protect our customers from identity theft around the world. A program for U.S. PlayStation Network and Qriocity customers that includes a $1 million identity theft insurance policy per user was launched earlier today and announcements for other regions will be coming soon.

As we have announced, we will be offering a “Welcome Back” package to our customers once our PlayStation Network and Qriocity services are up and running. This will include, among other benefits, a month of free PlayStation Plus membership for all PSN customers, as well as an extension of subscriptions for PlayStation Plus and Music Unlimited customers to make up for time lost.

As a company we — and I — apologize for the inconvenience and concern caused by this attack. Under the leadership of Kazuo Hirai, we have teams working around the clock and around the world to restore your access to those services as quickly, and as safely, as possible.

I know some believe we should have notified our customers earlier than we did. It’s a fair question. As soon as we discovered the potential scope of the intrusion, we shut down the PlayStation Network and Qriocity services and hired some of the best technical experts in the field to determine what happened. I wish we could have gotten the answers we needed sooner, but forensic analysis is a complex, time-consuming process. Hackers, after all, do their best to cover their tracks, and it took some time for our experts to find those tracks and begin to identify what personal information had — or had not — been taken.

As a result of what we discovered we notified you of the breach. Our investigation is ongoing, and we are upgrading our security so that if attacks like this happen again, our defenses will be even stronger.

In the last few months, Sony has faced a terrible earthquake and tsunami in Japan. But now we are facing a very man-made event – a criminal attack on us — and on you — and we are working with the FBI and other law enforcement agencies around the world to apprehend those responsible.

In the coming days, we will restore service to the networks and welcome you back to the fun. I wanted to personally reach out and let you know that we are committed to serving you to the very best of our ability, protecting your information better than ever, and getting you back to what you signed up for – all the games and great entertainment experiences that you expect from Sony.