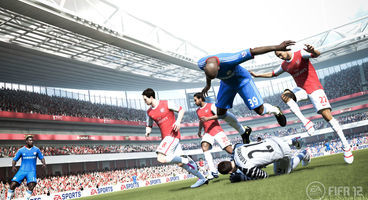 EA Sports has announced that it will be releasing a patch for the PlayStation 3 and Xbox 360 versions of FIFA 12 in two or three weeks. According to senior community manager Romily Broad, the update will have significant fixes. EA will also release a patch seperately for the PC version.

A more immediate update will fix the FIFA Ultimate Team feature, which Broad claimed EA was deliberately capping the web app as it waited for the huge spike of launch period players to settle down. The PC update will also remove unnecessarily large downloads and disconnects associated with Origin.

EA Sports is also responded to exploits in the online multiplayer Head to Head seasons mode, where players have been playing only as the goalkeeper, letting the AI do all of the work for them. Separate to all of this, though, is the thorny issue of goalkeepers in Head to Head Seasons mode - the new ranked online gameplay system for FIFA 12.

"People seem to be exploiting this," Broad said. "If they're not very good at defending they can use this to get an unfair advantage. People who are very good at the game won't have a problem. They'll just be able to pass it around your defenders and you'll find yourself one-on-one with their top strikers every time.

"But that's something we've got under review. If we think the vast majority of people hate it we'll do something about it."

Electronic Arts is taking more time to fix FIFA 12 than any previous game in the series, probably because it was one of the biggest launches in UK history and sold over 3M units in first week of release.

According to Broad, "Things are different with FIFA 12. The first patch for the console is going to be coming out within days, like maybe 14 or 21 of them. Two or three weeks from now the first patch will happen and that's going to make big corrections to some of the things that are bothering people the most.

"We're going to be doing this constantly, with our thumbs in the middle of the community trying to get people to tell us what they think, and then we'll be acting on it for the rest of the season. That's a commitment we're definitely making. It would be nice if people came and talked to us about the things that are bothering them, because we are going to be listening."