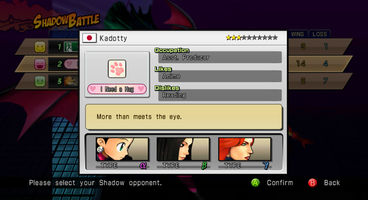 Capcom has let us know of a new feature for Marvel Vs. Capcom 3 called the 'Shadow Mode'. What it is is basically fighting famous fighting experts whose tendencies and strategies are built into the AI of various DLC packs, so you can virtually face off against the best Marvel Vs. Capcom players on Earth.

According to the announcement: A series of downloadable packs, each will contain three unique teams to battle against, with their own programmed special techniques and preferences. The first pack will include the team and AI Personality of the game’s producer, Ryota Niitsuma, in addition to the Shadow Mode teams for Assistant Producer Akihito Kadowaki and a QA team leader.

There's no word on whether this will be free or premium DLC yet, however.