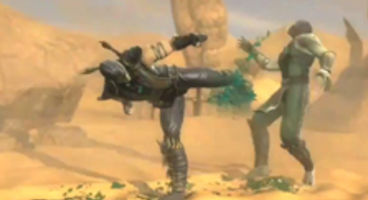 Goro is a 2,000 year old human-dragon while Jade was a personal assassin. These two join the other sixteen confirmed contestants out for blood and guts.

Cyrax, Ermac, Jax, Johnny Cage, Kitana, Kung Lao, Mileena, Nightwolf, Raiden, Reptile, Scorpion, Sektor, Shao Kahn, Sindel, Sonya and Sub-Zero are now joined by Goro and Jade. It's this kind of school reunion no one would ever want to miss.

Warner Bros has April 2011 in their sights for Mortal Kombat to release, which sees the cult classic franchise back in its gory glory with no punches held back when it comes to those trademark over-the-top finishers. Mortal Kombat releases on Xbox 360 and PS3.