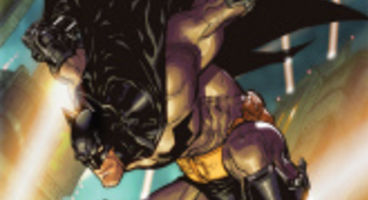 A new comic based on Batman: Arkham City will be hitting stores this coming May; the image on the left is from the cover to issue #1.

According to the presser:

This May, fans of Batman: Arkham Asylum, one of the most critically-acclaimed videogames of 2009, can delve even deeper into the story with the upcoming BATMAN: ARKHAM CITY six-issue comic book miniseries. Published by DC Comics, the miniseries bridges the gap between Batman: Arkham Asylum and its highly-anticipated sequel, BATMAN: ARKHAM CITY, scheduled for release this fall.

Written by Paul Dini, writer of Batman: The Animated Series and the two Arkham games, the comic is drawn by Carlos D’anda, who is the concept artist for the videogames. BATMAN: ARKHAM CITY will double-ship in its first month, with issues 1& 2 landing in May. Each issue will be available in print and digitally for $2.99 each.