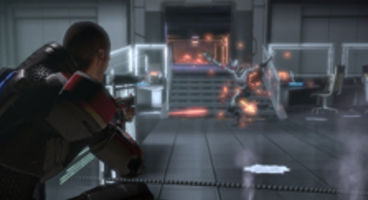 Casey Hudson, Mass Effect supremo, has said BioWare is continuing to "think of a way" you and friends can play in Mass Effect but they "haven't yet come up with a way".

They don't want just multiplayer clichés like team deathmatch. An MMO setting "kind of makes sense" for Mass Effect he said; the IP "has that quality" to it.

"We've been trying to think of a way that makes sense for people to experience Mass Effect with their friends. We haven't yet come up with a way to do that, so we don't have anything to announce at this time. But, obviously, multiplayer is something we want to do more of in the future as a company," revealed Mass Effect producer Casey Hudson.

"A lot of people say that they want to see an MMO - that kind of makes sense for this universe." Currently BioWare is fleshing out an MMO about a galaxy far, far away and it's due to launch later this year.

"Part of what you're trying to do is save the universe so you can live in it. That's part of the promise for any great IP. It has to be a world worth saving. Mass Effect has that quality to it," he said. An enormous effort has been put in building up Mass Effect's lore.

"If you get rid of the Reapers and win that," he added, "wouldn't it be amazing to just live on the Citadel or just take a ship to Omega? That makes sense." Details of Mass Effect 3 have begun to emerge like returning squad mates and better, deeper RPG features.

Would you consider a Mass Effect MMO, or perhaps some multiplayer?