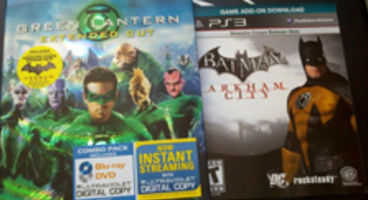 There will be a Sinestro Corps outfit code for Rocksteady's PS3 Batman: Arkham City included in limited copies of Green Lantern: Extended Cut on Blu-ray.

So far only Best Buy chains have announced the promotion but others will get it too. It's likely it will be official DLC eventually. It's out on Blu-ray October 14th.

The offer is only for PlayStation 3 copies of Batman: Arkham City but it could hit every platform eventually if the skin is introduced as official DLC down the line. Sinestro Corps was founded by former Green Lantern turned villain, Sinestro.

He attempted to recruit Batman in Green Lantern volume 4 issue 17, apparently, but the Dark Knight turned him down. This promotion for the Green Lantern: Extended Cut on Blu-ray looks to be a US offer only.