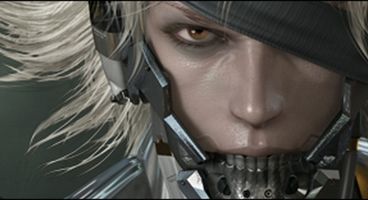 It's not actually part of the core Metal Gear Solid series, despite being set "several years after MGS4." The original team lost sight of what the game should be, but it rebooted with Platinum.

This means that Rising is a full blooded spin-off for the Metal Gear series, starring Raiden who was introduced with MGS2: Sons of Liberty as a protagonist. Chopping stuff up wasn't enough.

"We've only said that the period setting is several years after MGS4. Metal Gear Rising is not part of the Metal Gear Solid series. At present, we can't say more than this," twittered Kojipro.

Hideo Kojima said: "When entrusting the next title to the Kojima Productions staff, I'm always told, 'For the fans, it's no good if it's not the director's Metal Gear,'" referring to himself. "This isn't the case, though. Saying, 'If it's a spinoff can it bit done?', I entrusted the old Rising to the young staff."

"However, I feel certain that if their Rising had been released to the world, there would have been many people who felt, 'This isn't Metal Gear.'" The slicing mechanic shown during the E3 2010 trailer remains in the game, reassures Kojima. The reboot lets you carve up enemies and objects, but not absolutely everything like originally intended.

This new Rising will run at 60 frames a second, Kojima confirms: "The old Rising that was being prototyped at Kojima Productions looked visually like Metal Gear, but it was 30 frames per second and required complicated controls."

"I made one request of Platinum: a cool Raiden who moves nice and smooth at 60 frames per second."