Michael Johnson finds out if Metal Gear Rising: Revengeance is a worthy port for PC gamers..

Kojima: Metal Gear Solid 5 on PC "definitely something that I would like to do"

Hideo Kojima notes his "original background" is PC as that's how he started, and so he'd personally love for Metal Gear Solid 5 to revive the art of hiding in boxes on desktops like the days of old.

Sadly he "cannot make a formal announcement" but it's "definitely something" he wants to happen. 2013's Metal Gear Rising: Revengeance did come to PC eventually...

The recently released PC version of Metal Gear: Revengeance is having offline issues, leaving players unable to run the game without an active connection.

Metal Gear Rising: Revengeance coming to PC? Fans were chuffed to bits. It's limited to a 1080p resolution? Chuffed not so much. JP Kellams from Platinum Games implores PC gamers to champion their screens.

The creative producer wants to pass the message along to Konami bigwigs that the "more extreme resolutions" ... "aren't so extreme." He's been setting up visits to Valve for Japanese devs.

The Steam and PC debut of Metal Gear Rising: Revengeance is scheduled for early next month on January 9th, announces Konami. Pre-purchases of the more action-orientated spin-off begin on Steam.

How many shiny coins will it cost us to play a half cyborg Raiden? £19.99. The PC release also comes with all DLC released. Konami also call this the first day of Steam Holiday sales.

The system specs for the PC version of Metal Gear Rising: Revengeance have been revealed. The game is being released "soon" for the first time, and will require Steam. 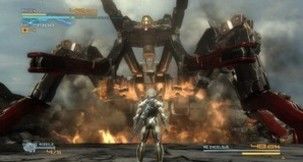