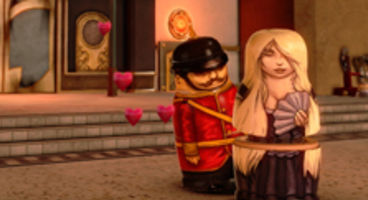 "I really wanna do a lot more with Tim. I've always been a huge Tim fan. Grim Fandango to me is one of the greatest works of art in gaming," said THQ core games boss Danny Bilson, referring to veteran game designer Tim Schafer.

"Stacking I fell in love with. When Tim brought that in, I was like, 'Let's do this game! This is fantastic!'," he revealed. Stacking is Double Fine's latest digital title in the works. THQ don't want to let the studio go to another publisher, but they need more return.

"There's a few more that I've identified, but I haven't made those deals yet," he continued. THQ and the studio only have a contract in place for Costume Quest and Stacking. "We've gotta get some hits rolling so I have more money to spend, to be honest with you."

Let's hope the cash THQ get from Homefront, Red Faction: Armageddon and maybe even Stacking this Q1 will convince the THQ powers to keep Double Fine published.